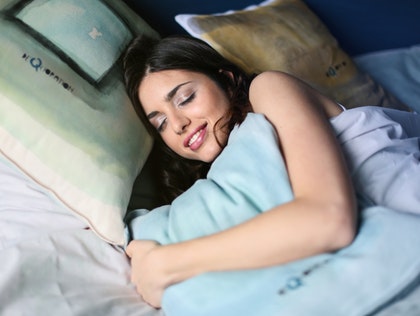 Research suggests that sleeping on the sides during the third trimester of pregnancy reduces the chance of stillbirth.

This sleeping position is important in any episode of sleep, i.e., both during the night and day-time naps.

The overall risk of stillbirth in an uncomplicated low-risk pregnancy is low (approximately in the region of 1 in 200).

The risk would likely to lower even further if the pregnant woman sleeps on her side.

Although sleeping on the supine position could be uncomfortable in the third trimester, research shows that 1 in 10 pregnant women sleep on their back.

It is estimated that about 6% of the stillbirths could be due to sleeping in a supine position.

It is believed that human beings stay the longest in bed in the same position in which they go to sleep.

Therefore, it is always advisable to go to sleep on the side. At present this is the focus of all medical advice.

Studies suggest that going to sleep both on the right and left positions on the third trimester are equally safe. Therefore, you may choose to sleep on either side whichever is comfortable for you.

How the sleeping position is going to be throughout the entire sleep is not under your control.

Therefore, one should not panic if you find yourself on supine (‘lying on back’) position.

Just roll over to the sides after waking up at night.

Why lying on the back increases risk of stillbirth?

The exact cause is not known.

It is believed due to the following reasons:

1.  The weight of the uterus (womb), placenta and the baby fall on a major blood vessel (‘inferior vena cava’) when lying on supine position.

This causes compression of the vena cava.

Vena cava carries the blood from the lower limbs (‘venous return’) to the lungs and finally to heart.

When the vena cava is compressed while lying flat, the amount of blood reaching the heart reduces.

As a result, the blood pressure drops (may cause a fainting episode to the mother) and blood circulation to the placenta and the baby is lowered. This may lead to lack of oxygen in the baby.

2. Sleeping on supine position also increases the risk of a condition called ‘obstructive sleep apnoea’. This has been found to be associated with stillbirth.

3. There might be direct pressure on another major blood vessel called aorta (‘aortic compression’). Blood supply to the uterus comes from the aorta through a pair of blood vessels called ‘uterine arteries’.

Sometimes it may be difficult to sleep on the sides when the pregnant woman suffers from Pelvic girdle pain.

A pillow between legs (to ensure the top leg does not touch the bottom leg) could be helpful in reducing pain.

Sometimes, one or two pillows on the back might feel comfortable while lying on the side.

If sleeping on the sides is not possible at all (due to severe pain or certain medical condition) then try to sleep with at least 30 degrees tilt at the head end (this is the recommended position to lie on the back during labour).

Try to avoid lying flat on the bed during sleep.

1. Sleeping on the side is an effective way to reduce stillbirth.

2. Sleeping on either side (left or right) are equally safe and effective.

3. Lying on the side while going to sleep is very important, as the initial sleeping position is the longest position during sleep.

4. It is advisable to roll over to the side after waking up at night.

5. Lying on the side is important during any sleeping episode, including a day-time nap.