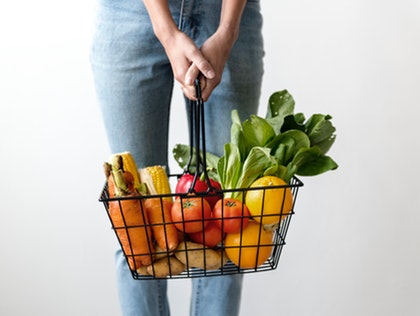 The interest in the consumption of organic food is growing worldwide. This article provides a brief overview of organic food and explores any benefit of use during pregnancy.

Good nutrition is an important prerequisite for health and wellbeing during pregnancy. Many pregnant women are now choosing to eat organic food due to its growing popularity and suggested health benefits.

What is organic food?

Agricultural products labelled as ‘organic’ indicates that while growing the crops the farms do not use the following:

1. Avoiding fertilisers and building the fertility of the soil with natural method:

a) Crops are grown with natural fertilizers (such as manure and compost).

b) Controlling the weeds naturally by creating healthy soil (such as hand weeding, crop rotation and usage of clover with a view of fixing nitrogen from the air)

a) Use of naturally-derived pesticides

3. No use of artificial colours and preservatives.

Animal products labelled as ‘organic’ indicates that while raising animals for meat, eggs, and dairy products must have the following:

1. Should not be given antibiotics, wormers, growth hormones or animal by-products

In non-organic farming, the animals are often given growth hormones and GMO feed for faster growth.

They often use prophylactic antibiotics and other medicines to prevent disease and the animals may not have access to outdoor space where they are raised.

There is strict regulation for organic food production under European Law which needs inspection (at least once every year) and certification. The legal requirements are called ‘Organic Standards’.

The standards and regulations also take into account the environment and wildlife-friendly food production.

What are the suggested benefits of organic farming?

As no chemical pesticides are used which reduces environmental pollution.

Free-range life (open air space) for the animals in the farm helping in animal welfare.

There is only a negligible difference in the actual nutritional values of organic agricultural products compared to the non-organic ones.

However, the following benefits are reported:

Organic fruits and vegetables could have more phenolic compounds.

They are some studies to show that phenolic compounds can prevent cardiovascular diseases (such as coronary artery disease/ heart attack) and cancer. However, more research is needed in this area.

Perhaps the main benefit of organic food and vegetables is the less amount of pesticides in the food.

Cadmium (a type of heavy metal) which is thought to cause cancer and harmful to the kidneys. Organic food is thought to have reduced cadmium level.

A higher antioxidant level in organic food has been reported.

Therefore the organic fruits and vegetables are likely to be fresh.

1. A higher concentration of Omega-3 Fatty Acid in organic milk and meat.

3. A higher amount of some micronutrients (such as iron, some carotenoids, and Vitamin E)

4. No antibiotics are given to the animals, therefore, less chance of antibiotic resistance to the consumers.

Pesticides are chemicals used to destroy insects, organisms or certain unwanted vegetation harmful to the plants in the agricultural industry. Pesticides include weed killers, insecticides and fungicides. As they are used widely in growing fruits and vegetables, there is an emerging concern for human health.

Moreover, pesticides can cause water pollution and also direct toxicity to wildlife. On the other hand, pesticides are present in the food.

Pesticides used in organic farming are produced from natural substances such as citronella and clove oil.

3. Developing a good quality of soil

Farms growing organic agricultural products do use various pesticides. Therefore, organic fruits and vegetables are not free of pesticides.

However, instead of synthetic products (as used by non-organic farms), they use naturally-derived pesticides.

These pesticides are believed to have far fewer health hazards to their synthetic counterparts.

Effects of pesticides on human health

Pesticides play an important role in agriculture by preventing loss of crops. Therefore, it is unlikely that its use will stop in the foreseeable future. So the consequences on human beings and the generations to come would remain a concern.

According to WHO, none of the pesticides approved to be used today in the agricultural food production is ‘genotoxic’ (i.e., can damage the human gene/ DNA to make permanent change called mutation to the gene or cause cancer) when consumed within the safe limit.

Once an individual is exposed to a large amount of pesticide (above the safe limit), then only it can cause poisoning or other adverse effects on health (such as cancer or teratogenicity).

The level of pesticides in the food should not exceed the Maximum Residue Limit (MRL) set by local governments and international organisations such as WHO.

Higher exposures of pesticides have been linked with the following conditions:

Exposure during pregnancy (occupational/ use of pesticides at home) has been associated with:

Some studies indicate that increased exposure to organophosphorus pesticides can lead to:

4. 7 years of age: Poor cognitive development (such as memory and IQ) (Ref)

Research suggests that people who consume organic food usually tend to have in general a healthier lifestyle with less incidence of smoking, eating more fruits and vegetables and physically more active. Therefore, these factors need to be considered when evaluating the health benefits of organic food.

The health benefits are as follows:

3. Reduced risk of cognitive-developmental problems of children due to the presence of pesticides in food.

The scientific data is limited, so more research is required in this field. The reported benefits are as follows:

We do not know what is the exact cause of hypospadias. Both genetic and environmental factors have been thought to be responsible.

The research suggested a reduced risk of hypospadias and cryptorchidism of the newborn if the mother consumes organic food during pregnancy.

Prenatal exposures to organochlorine pesticides and Cadmium (through mother’s diet or environmental exposure) have been associated with an increased chance of hypospadias.

These pesticides and heavy metals could interfere with the function of the placenta.

This is believed to be the case as hypospadias often occurs to pregnant women who have preeclampsia and/ or intrauterine growth restriction of the fetus (as both these conditions are related to disturbance of the function of the placenta).

Preeclampsia is common and occurs in 3-10% of all pregnancies.

Some studies suggested that consumption of organic vegetables during pregnancy reduces the risk of developing preeclampsia.

The exact mechanism is not known. It might be due to reduced exposure to pesticides, plant by-products or some changes in the gut flora.

How can we reduce the consumption of pesticides in food?

Washing the fruits and vegetables thoroughly in water removes most of the pesticides from food. Some prefer to grow their own or buy organic food, which can be expensive.

Organic food seems to have some benefits (mainly non-nutritional especially in agricultural products) over non-organic food. But this could be expensive and out-of-reach for many. The risk of pesticide exposure from non-organic food is minimal when bought from a reputed source.

However, the pesticide risk could be higher if the non-organic food is obtained from unregulated farming who do not follow the National or International regulation on pesticide use.

The use of organic food should be an individual choice of a pregnant woman. Consumption of non-organic food (which meets recommended standards) during pregnancy is safe when obtained from a trusted source and washed and cleaned properly.