Pelvic Girdle Pain (PGP), formerly known as Symphysis Pubis Dysfunction (SPD), is a common health condition during pregnancy. With early intervention and multidisciplinary approach, an excellent outcome is possible. If not properly treated, PGP could lead to anxiety, depression and poor quality of life of pregnant women. This article provides a brief overview of PGP and its impact on the wellbeing of the mother during the pregnancy and beyond. 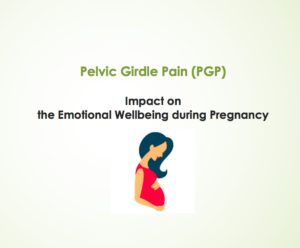 What is Pelvic Girdle?

The Pelvic Girdle is the other name of the pelvis or the pelvic bone. This connects the trunk with the legs and plays an important role in the support and balance of the body.

Pelvis consists of the following:

The pelvis is attached to the spine through the lumbosacral joint (LSJ) and with the legs through hip joint. 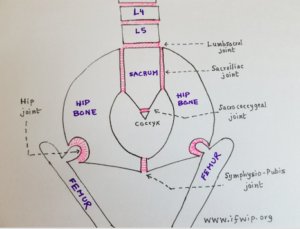 What is pelvic girdle pain (PGP)?

Pelvic girdle pain (PGP) refers to pain in the pelvis during the pregnancy and post-childbirth period. This relates to the three principle joints in the pelvis:

– Lumbosacral and sacroiliac joints on the back (posterior)

Pregnancy-induced PGP could start at any stages of pregnancy, birth or in the post-childbirth period.

How common is the PGP?

PGP is a common condition. It is estimated that at least 1 in 5 women get PGP during pregnancy. However, the severity of the pain varies from one individual to the other.  5-8% of these women have severe and debilitating SPD.

What is Symphysis Pubis Dysfunction (SPD)?

Previously pregnancy-related pain over the pubic bone (i.e, related to the symphysis pubis joint) was called Symphysis Pubis Dysfunction (SPD). Sometimes, the term SPD was used to indicate back pain as well.

“As healthcare practitioners, we appear to be unaware of how seriously disabling and painful symphysis pubis dysfunction (SPD) during pregnancy and labour can be.” (The Gap Study)

European Guideline (Ref 2) has now suggested the umbrella term, Pelvic Girdle Pain (PGP) to include any pregnancy-related pelvic pain (anterior and posterior). Therefore, the term SPD is no longer in use.

What is Diastasis Symphysis Pubis (DSP)?

Why women get PGP and backache during the pregnancy?

PGP occurs as a result of increased strain on back and pelvis muscles.

The PGP happens due to the instability of the pelvic joints during pregnancy. As a compensatory mechanism, the muscles surrounding these joints (abdominal, pelvic floor, gluteal and para-spinal muscles) work harder. This results in muscle stiffness and pain, resulting in back pain and PGP in pregnancy.

This instability is the consequences of the following changes during pregnancy:

1. Increased load on the pelvis:

This is due to the growing fetus and weight gain.

2. Biomechanical changes in spine and pelvis:

Due to the growing fetus, the centre of the gravity of pregnant women shifts forwards (towards the abdomen).

To compensate for this, the following changes happen to the spine and the pelvis:

– The curvature of the lumbar spine (Lumbar lordosis) increases

– The curvature of the thoracic spine (Thoracic kyphosis) increases

– Anterior tilt of the pelvis

3. Laxity of the ligaments:

Ligaments are the special strong tissues which surround the joints. They give stability to the joints and reduce the strain on the joints during movement.

During the pregnancy, there are increased secretions of the hormones Relaxin and progesterone. These hormones break down the collagen fibres of the ligaments. As a result, the ligaments around the Symphysis pubis, the sacroiliac, and lumbosacral joints become loose and lax. This mechanism is important to allow widening of the pelvis to help the delivery of the baby.

Does PGP improve after the childbirth?

The Pelvic Girdle Pain (PGP) usually improves shortly after giving birth. (Ref 3) However, in 7% of mothers, the pain continues after the delivery of the baby. In some cases, it could stay for many months or even longer. However, this is very rare.

What are the risk factors for developing PGP?

PGP can happen without any risk factors.

However, the PGP is more common in presence of the following:

– PGP in the previous pregnancy

– Previous injury/ fracture of the pelvis

– Pelvic bone diseases, such as arthritis or sacroiliitis

– Poor posture including at workstations

– Poor muscle tone due to lack of exercise

– Difficult delivery such as shoulder dystocia

What are the symptoms of Pelvic Girdle Pain?

The woman has persistent discomfort or severe shooting, stabbing pelvic pain or a burning sensation.

The pain is especially worse during the following activities:

– Weight bearing in one leg (climbing stairs or getting dressed)

– Rising from a chair

– Moving the legs apart (getting in or out of the bed, bath or car)

– Sometimes there is audible clicking or grinding sensation over pelvic joints.

The Pelvic Girdle Pain (PGP) is usually relieved by rest. The pain is usually located over the pubic bone and/ or one or both sides of the lower back. The PGP can radiate to the groin, perineum (the area between the vagina and anus), lower abdomen and the thigh.

With proper treatment, it is possible to minimise the pain and the disability and prevent worsening of the symptoms.

There is a possibility that the PGP could deteriorate as the pregnancy advances if adequate treatment is not initiated on time. Therefore, it is always advisable to seek advice early from the healthcare professionals.

Can the PGP be prevented?

It may not be possible to prevent PGP entirely. However, some measures could be taken before pregnancy (or early pregnancy) to minimising the risk of developing pregnancy-induced pelvic girdle pain.

The possible preventative measures are as follows:

Instability of the pelvis is the key problem in PGP. Exercises to increase core stability (such as Pilates) have shown to prevent the onset and reduce complications of PGP. This is especially helpful if started before or in early stages of pregnancy. (Ref 4)

Studies have shown that PFE performed from early pregnancy could reduce the risk of developing PGP. (Ref 3)

Awareness of proper posture is vital to ensure uniform weight distribution across the pelvis. This results in less strain on the supporting ligaments and the muscles.

3. Treatment of pre-existing back conditions:

If the woman has any back condition (such as arthritis/ sciatica/ prolapsed intervertebral disc/‘slipped disc’), then it is always advisable to get this adequately treated before pregnancy. If this is not possible, then early referral to the physiotherapist during pregnancy is recommended.

It is helpful to reduce weight (if overweight) before pregnancy.

If a pregnant woman has any risk factors (mentioned above), then early referral to the physiotherapy is recommended. 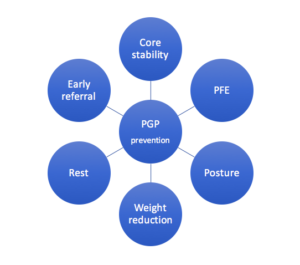 What is the treatment of Pelvic Girdle Pain (previously called SPD)/ low back pain during pregnancy?

A good multidisciplinary approach is needed. This improves the existing symptoms, prevents further worsening of the symptoms, and improve quality of life of the pregnant women and wellbeing.

It is absolutely vital to make an early referral to a physiotherapist, especially with special expertise in treating PGP.

– Sitting or standing for long

– Keeping the knees together during sidewise movements

– Paracetamol, Low potency opiates (such as codeine or dihydrocodeine) or combination of both paracetamol and codeine.

– Application of ice or external heat

– Massage may also be helpful.

Pelvic girdle support, such as trochanteric belts, are often advised in the treatment of PGP. However, there is no strong evidence of its efficacy. (Ref 3)

Elbow crutches, walking frames or wheelchair may be necessary in severe cases.

Every woman with PGP should be asked how they are coping emotionally. Referrals may be necessary to the counselling services or perinatal mental health teams if the PGP is causing mental health symptoms. 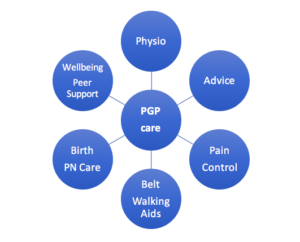 Is it possible to have a vaginal birth if I suffer from PGP?

It is always advisable to have a vaginal birth whenever possible. Utmost care needs to be taken to avoid excessive widening of legs/ hip joints, especially beyond the ‘pain-free range of movement’. Otherwise, this could worsen PGP after the childbirth.

For women with severe PGP with a significant impact on the quality of life, early induction of labour is offered sometimes.

Very rarely the PGP is so severe that a comfortable position at birth cannot be achieved or maintained. Elective (planned) Caesarean Section is necessary in such cases.

It is vital to assess the “range of pain-free movement” in the lower spine and hips before labour in the antenatal period.

It is recommended that the pregnant woman remains mobile during labour.

It is also important not to move the legs/ hips beyond her normal range of pain-free movement. The SPD pain may markedly worsen under these conditions during labour and can persist postnatally for longer.

Use of epidural and spinal anaesthesia has been discouraged on account of masking SPD pain, although there is no evidence to support this view.

Bed rest may be necessary until the pain subsides.

Women with SPD might require more support and could need to stay longer in the hospital. Continuity of care from community midwives to health visitors is important, as is active involvement of the general practitioner.

What is the impact of the Pelvic Girdle Pain on the emotional wellbeing of the mother?

Pelvic girdle pain could have a significant impact on the quality of life. This could even lead to mental health conditions when the mother does not get adequate support or the condition does not improve. PGP is also a cause of sickness absence at work during pregnancy.

PGP could have the following impact on the emotional health of the woman:

2. Depression and low self-esteem: both antenatal and postnatal depression

3. Guilt and a sense of failure: whether she would be less able to carry out responsibilities as a mother/ parent

4. Anger/ frustration: as she needs to depend on others for help, unable to enjoy pregnancy, maintain fitness. This also could lead to a sense of helplessness.

5. Effect on chronic pain perception: If someone has had pain for a long time, this can affect the way her brain reacts to pain and make its effects more intense.

“Significant pain (more than 7/10 on a visual analogue scale) in the early stages of a condition is a major predictor of chronicity43 so effective pain relief and management in early stages are vital.” (Ref. 5)

6. Impact on the family relationship:

The degree of discomfort often causes the woman significant difficulty in caring for her family and can lead to social isolation. She is also at greater risk of developing severe anxiety and depression. (Ref 6) 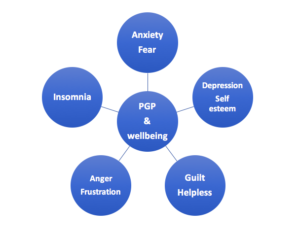 – Pelvic Girdle Pain (PGP) is common, affecting at least 1 in 5 women during pregnancy.

– The European guideline currently recommends the use of the umbrella term PGP for pregnancy-induced pelvic pain.

Therefore, the term SPD is no longer in use in most current medical literature.

– Vaginal birth is the best option whenever possible.

– PGP can occur without any risk factor

– If not properly treated, PGP can have a significant impact on the quality of life of the pregnant woman. This also leads to mental health conditions during pregnancy and postpartum period.

– Good treatment is available and full recovery is possible.

– Seeking help early is recommended to prevent worsening of symptoms.

– Pre-pregnancy exercises to ensure core stability (such as Pilates) and weight reduction (if high BMI) could help in preventing PGP during pregnancy.

2. Pregnancy Related Pelvic Girdle Pain For mothers to be and new mothers.

© 2017 International Forum for Wellbeing in Pregnancy All Rights Reserved  |
We use cookies to ensure that we give you the best experience on our website. If you continue to use this site we will assume that you are happy with it.AcceptReject
You can revoke your consent any time using the revoke consent button.Revoke consent