Childbirth is a life-changing event for the parents. This is a time of joy, happiness, and fulfillment. However, this comes with a lot of changes and challenges in the life of the couple. Sometimes, these challenges could lead to a disturbance in their marital relationship.

This article briefly outlines different factors which can contribute to the changes in the relationship satisfaction. This would help (both the parents and the practitioners) to understand the relationship dynamics in this crucial phase of life and explore different ways to strengthen this. 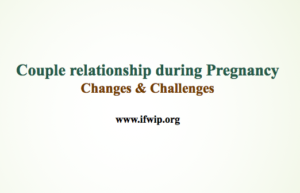 Pregnancy is a time for a significant change in the body, mind, relationship, and self-identity. A positive relationship between the pregnant woman and her partner plays a vital role during the transition to parenthood.

The perinatal period could be stressful and overwhelming. This could put a strain on the couple relationship. A stronger bond between couples could be a protective factor against pregnancy-related anxiety and parenting stress.

Why does a good the couple relationship matter during pregnancy?

It is well-known that the couple’s relationship satisfaction is an important factor for the wellbeing during pregnancy.

A poor relationship can contribute to mental health disorders during pregnancy and post-childbirth period. (Ref 1)

A satisfying couple relationship is also vital for:

– Better health and wellbeing of the children (Ref 5)

A lot of measures can be taken during the transition to parenthood to strengthen the couple relationship.

What factors can contribute to a decline in the couple’s relationship?

In the first year of childbirth, between 40-70% of couples report some decline in their relationship. (Ref 6)

The following factors can have a negative impact on the couple relationship:

A) The common changes in the post-partum period:

1) Tiredness, exhaustion, and lack of sleep:

Parents without much support would need to care for the child round-the-clock. This could come as a shock to many and they might feel helpless. This could also lead to tiredness, exhaustion, and insomnia.

Research has shown that fatigue/ tiredness/sleep disturbances can impair the couple relationship after the childbirth. (Ref 7)

Many parents report a decline in positive communication and dialogue (between them as a couple) during the transition to parenthood period. Sometimes they might feel a less emotional support and response from the other partner.

A common reason for conflict is the sharing of the household work.

After the childbirth, women often have to take up more responsibility in the household. They might feel the need to reduce hours at work (and subsequent less salary) to meet the childcare needs. The perception of unfair distribution of household duties could lead to argument and conflict. (Ref 9)

While meeting the demands of childcare responsibilities and household work, couples often do not find much time to spend together to share values and support each other.

As a result, either of the spouses might feel lonely, isolated and less supported. Many conflicts might remain unresolved with a meaningful dialogue.

They might also have less frequent sexual intimacy. Sometimes this could be related to the childbirth process (for example, the woman could have a painful scar/ episiotomy wound in the perineum).

All these factors might create an emotional distance and less satisfaction with their relationship. (Ref 10)

Research has shown that couples with children with unpredictable behaviour (Ref 11) or a disability (Ref 12) are at increased risk of declining relationship.

6) Less perceived support from the partner:

This is thought to be an important factor for a declining couple relationship during the transition to parenthood.

Mental health illnesses of one or both the couples could have a significant impact on the relationship.

Any pre-existing relationship problem can intensify after the baby is born. (Ref 11)

The attachment style of each parent is very important in determining a healthy relationship.

If one or both parents have an insecure attachment style, then they might have less relationship satisfaction. (Ref)

This could lead to stress and feelings of insecurity for the future.

Some studies have demonstrated that the relationships are better in planned pregnancies. (Ref 13)

It might appear that unplanned pregnancies are associated with more relationship conflicts.

However, the research findings have shown mixed evidence on the connections between unplanned pregnancy and poor couple relationship.

While some have shown a poor relationship (Ref 14), others have indicated a better couple bonding and relationship with unplanned pregnancies (Ref 11).

What can help to prevent a decline in the couple relationship?

It is important to remember and reassure parents that although a decline in the relationship is common after the childbirth, it is not inevitable.

The following could be helpful in having a positive couple relationship:

A) Preparing for parenthood programme:

A structured ‘Preparing for Parenthood’ programme for the couples (during pregnancy or after the childbirth) with a view to:

1. provide a realistic expectation of parenthood.

2. providing skills to deal with common relationship difficulties, such as conflict resolution and communication skills.

B) Spending together more quality time:

Spending some time together to discuss and appreciate each other’s happy moments, challenges and difficulties of parenthood.

Sharing the responsibilities (of household chores and childcare equally) between both parents have been shown to be a protective factor for couple relationship. (Ref 15)

Support from the family, friends and healthcare professionals could be helpful in reducing the stress of parenthood.

It is important to deal with any relationship problem before the child is born and the parenting journey begins.

Screening of the attachment style of each parent during the antenatal period could be helpful. This could identify insecure attachment. A referral to a relationship counsellor would be of help. (Ref)

1) The period of transition to parenthood can result in a decline in the couple relationship. Although this is common but not inevitable, so couples should be reassured during pregnancy and after the childbirth. It is also essential to highlight the importance of self-care and own personal health.

2) It is important to be aware of the potential risk factors which can contribute to a poor relationship. They include changes after the childbirth (such as tiredness/ lack of sleep, poor communication, spending less quality time as a couple, unequal sharing of childcare and household responsibilities), insecure adult attachment style of one or both parents, financial difficulties and preexisting relationship difficulties.

3) Poor couple relationship can lead to separation/ breakdown in marriage, mental health problems (in either or both the parents), and insecure parent-infant attachments (with subsequent health impact on the child in the forthcoming years).

4) Support from the partner and social support (family, friends and healthcare professionals) can act as a buffer and are thought to be protective.

5) A structured transition to parenthood programme could be helpful. This should provide evidence-based information on the realities and practical aspects of parenthood. They also should help couples develop problem-solving/ conflict resolution and communication skills.

6) Any preexisting couple relationship problem during pregnancy should be identified and addressed before the childbirth.

Identifying insecure adult attachment style (in one or both) parents is particularly helpful, preferably during pregnancy. They might benefit from a referral to a relationship counsellor.

3) Whisman, M. A., & Uebelacker, L. A. (2006). Impairment and distress associated with relationship discord in a national sample of married or cohabiting adults. Journal of Family Psychology 20 369-377.

6) Shapiro, A.F. and Gottman, J.M., 2005. Effects on Marriage of a Psycho- Communicative-Educational Intervention With Couples Undergoing the Transition to Parenthood, Evaluation at 1-Year Post Intervention. Journal of Family Communication 5, 1–24.

12) Glenn, F., 2007. Growing together, or drifting apart: children with disabilities and their parents’ relationship. One plus One, London.